Last week Nick Higham, Edvin Deadman, and I ran a minisymposium on matrix functions at the SIAM Applied Linear Algebra 2015 conference (link). This post gives a brief summary of each talk, links to published work, and (once they appear) links to the slides with synchronised audio.

Edit: Links to the talks are now available.

Attendance at the sessions was very good, with some high-quality questions coming from the audience.

The symposium had two sessions.

Peter Kandolf describing the famour “hump” in the matrix exponential.

END_OF_DOCUMENT_TOKEN_TO_BE_REPLACED

There are lots of new features in SciPy 0.13 (release notes) but for me the most important are the updated matrix functions in scipy.linalg and the one norm estimator in scipy.sparse.linalg.

In some of my recent research (related to section 4 of this) I’ve needed to estimate the one norm of a large (n^4 x n^2) dense matrix without computing each element. All we can assume is the ability to compute matrix-vector products (via some rather complicated function), meaning we only know the entries of the matrix implicitly.

END_OF_DOCUMENT_TOKEN_TO_BE_REPLACED

The late Gene Golub made an enormous contribution to numerical analysis throughout his career. After becoming a professor at Stanford he published the Matrix Computations with Charles Van Loan which is one of the great textbooks in the field (the 4th edition was recently released). Gene also served as SIAM president and was the founding editor of both the SISC and SIMAX journals.

When Gene died he left a significant sum of money behind which SIAM has used to fund summer schools for PhD students on topics relating to numerical linear algebra.

More information on Gene Golub can be found at Wikipedia or in a transcribed interview with Prof. Nick Higham.

This year the summer school was held in Shanghai and focused on matrix functions and matrix equations, the former of which is the subject of my PhD research. The next few paragraphs provide a brief summary of each course. 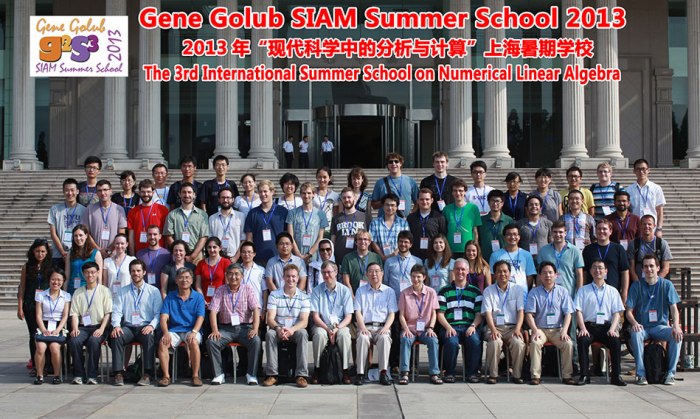 Group photo of everyone at G2S3.